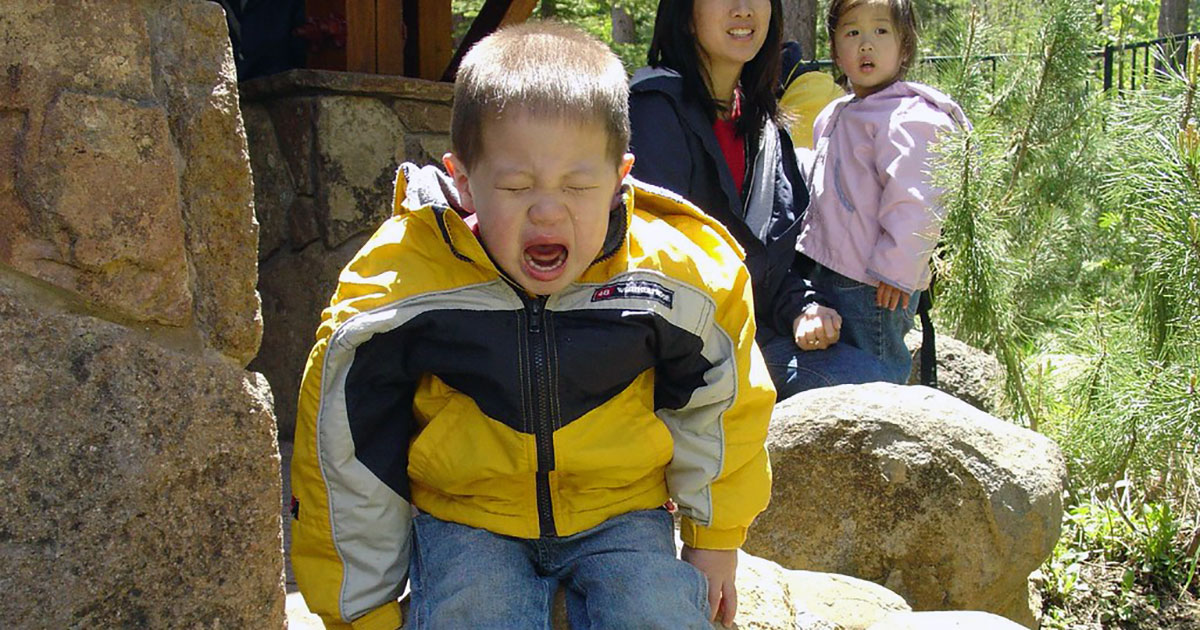 One of the trickiest situation any parent has to handle is a full-blown tantrum by your toddler — in public. The stir creates attention and calls for immediate action. And everybody is watching.

Here are some tips and insight into managing these meltdowns. You can do some things to help prevent them from happening in the first place. If those fail, taking quick action may be able to save the situation.

Let’s face it: everyone is lucky if they survive the toddler years, parents and toddlers included. We’ve been lucky in that our son’s temperament is rather laid back, but we’ve had our fair share of breakdowns in the grocery store and family dinners out interrupted by unexplained temper tantrums.

One epic tantrum happened in our local grocery store while my husband was out of town for a week and I was about 25 weeks pregnant with our second baby. We needed groceries, leaving without food was not an option, and my son had a massive breakdown.

Arms and legs flailing, and screaming. Getting down to his level and talking to him didn’t help, distraction didn’t help, he was unhappy and would not be pacified.

I have to say part of me was impressed by the meltdown as it was sustained. That kid had stamina! It went on for about 10 minutes as I threw the last groceries into our cart and rushed to the checkout aisle.

As I rushed to check out, I apologized to everyone around me. I remembered judging mothers before I had kids, so I expected judgmental looks and whispers from passersby of “can’t she control her child?” Here we are, I thought to myself, karma has won, the shoe is on the other foot. I totally deserved this very public tantrum and any judgment I received from others in the store.

But instead nearly everyone looked at me with pity and offered me the reassuring words, “don’t worry about it, we’ve all been there.” Thank goodness for caring strangers!

That helped me feel better about myself in the moment but didn’t help me prevent or stop the meltdown. So why do toddlers have tantrums in the first place and what can you do when a tantrum happens in public?

Unfortunately, temper tantrums are a normal and important part of toddlerhood. Yes, ear piercing screams and flailing about because you won’t let your two-year-old play with a knife is perfectly normal. Frustrating for both of you, but completely normal.

What causes tantrums is actually highly dependent on biology. Worry not, your child isn’t having a breakdown in Target because you’re a bad parent or because you use the wrong parenting philosophy. Despite what some claim, the children of Attachment Parents and Tiger Moms have tantrums too, because it’s normal and natural.

While toddlers have developed some level of autonomy through walking and basic language skills, they haven’t developed two important cognitive factors: 1. The necessary language skills to express themselves and; 2. self-control.

In the case of the first, it’s important to know all communication requires both receptive and expressive language.

Receptive language develops first, with expressive language playing catch up. Unfortunately for toddlers this means that they often understand much more than they can express and that, of course, leads to frustration.

Alternatively, sometimes they don’t have either the receptive or expressive language to understand or express how they feel and that too leads to frustration.  Essentially, it’s really frustrating to be a toddler.

Essentially the same thing is happening with your toddler when they’re struggling to communicate with you. Unfortunately for them they haven’t yet developed the all important skill of self-control, which prevents most of us from breaking into an uncontrollable rage when we get frustrated.

Unfortunately for everyone the prefrontal cortex is one of the last parts of the brain to fully develop. In fact, it’s not considered to be fully developed until age 12, with higher executive level functions not truly developing until we’re in our 20s.

As adults we’re used to being told “no” and for 90% of us we don’t fly off the handle when we hear the word. We might not be happy about it, it may frustrate us, but we don’t scream, yell and throw ourselves on the ground. This is because our prefrontal cortex has developed appropriately and we’re able to regulate our emotions and our reactions.

For the other 10%, we’ve all encountered them in airports, on the subway and at customer service counters, and they’re usually acting like toddlers having a meltdown when receiving information they don’t like.

So take comfort fellow parents. If your child has a tantrum in public or otherwise, it’s not because you’re doing parenting wrong or have ascribed to the wrong parenting philosophy. It’s biology, pure and simple, and there’s nothing you can do to skip this developmental stage.

How to Handle a Toddler Tantrum

So now that you’re breathing a sigh of relief that your toddler’s public tantrum isn’t your fault, how are you supposed to handle it when the inevitable happens? How do you manage your tiny, otherwise lovable ball of abject rage in the best way possible for them and for the sanity of those around you?

The American Academy of Pediatrics has great recommendations for handling tantrums and we use them in our home.  I would highly recommend you check them out, but I’ve summarized and organized them below as well.

Catch Them Being Good: Praise is a powerful tool for any of us, but especially for children. Day-to-day when you catch your child being well-behaved, being patient and gentle, let them know you noticed and give them praise for behaving so well. This can help incentivize good behavior.

Zero Tolerance: Have a zero tolerance behavior for things like hitting, biting, kicking or throwing. Make sure your child knows that behavior isn’t acceptable as soon as it happens.

One of the “Go Kits” Leslie and her husband keep available when they know their son is likely to have a tantrum. Each has a toy with wheels, a soft toy, a small book and triangle crayons. Triangle crayons are life savers, no rolling off the tables.

When All Else Fails:

On the bright side, temper tantrums are a temporary phase, even though it doesn’t seem like it at the time. Most children outgrow regular tantrums by the time they’re three or four, with the odd tantrum remaining through ages five and six. In the meantime, may the odds be ever in your favor.